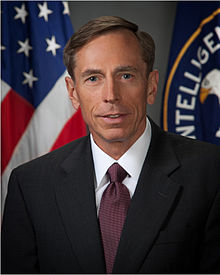 This is getting confusing.


What we thought we learned from leaks about yesterday’s classified congressional testimony by former CIA Director General David Petraeus, USA Retired, was clouded by today’s New York Times, which reported Petraeus said the rationale for changing the talking points requested by the House Intelligence Committee he and the CIA prepared in advance of his September 14 testimony was to avoid tipping off terrorists.

The report by the New York Times’ Eric Schmitt says Congressman Adam B. Schiff, a California Democrat, said “The General was adamant there was no politicization of the process, no White House interference or political agenda.”

Yet, Schmitt reports a few paragraphs earlier Petraeus said he could not say who changed the talking points: “At some point in the process—Mr. Petraeus told lawmakers he was not sure where—objections were raised to naming the groups, and the less specific word ‘extremists’ was substituted.”

Either Petraeus knows who changed the talking points or he doesn’t. And, if he doesn’t, it can’t be said the White House had no role in what was a patently political decision. These talking points were not being prepared for a policy wonk gathering but for the most political of all bodies, the U.S. House of Representatives—later to be used by Ambassador Susan Rice for her appearances on five Sunday TV shows explaining the attack. Both forums were not exactly benign exercises politically, coming as they did just weeks before the presidential election.

Sensing their vulnerability, even the White House took the extraordinary step today of refuting the testimony, through National Security Council spokesman Ben Rhoades, The Washington Times reported. Rhoades, no political virgin, is a former Obama campaign staffer. He has served as President Barack Obama’s speechwriter since 2007 and has written all of Obama’s key foreign policy speeches.

But, wait, I thought Cong. Schiff said Petraeus was “adamant” the White House was not involved.

Congressman Peter King, Chairman of House Homeland Security Committee, a New York Republican, reflecting the obvious fact that changing the talking points was a political act, not an intelligence-related one, came out of the testimony and said it was clear to him there was interference outside the intelligence community: “We need to find out who did this and why.”

My head is spinning. If they would just say who altered the Talking Points, we might be able to resolve this inconsistency. (And, it does not work to say an inter-agency process did.)

Instead, the committees will have to call all in the chain of command and the obvious ones outside the chain of command, starting with Valerie Jarrett and David Axelrod, to testify under oath about their involvement, or lack thereof, in altering the talking points.  Absent the Administration voluntarily identifying who altered, or ordered the alteration of, the talking points, a Special Prosecutor needs to be appointed.


Mary Claire Kendall is a Washington-based writer. She writes a regular column for Forbes.com, most recently "Doolittle's Raiders And The Miracle That Saved Them."

Mary Claire Kendall
Mary Claire Kendall is a writer and producer. Her book, "Oasis: Conversion Stories of Hollywood Legends," was published in 2015 in the United States and in Spain in 2016 under the title "También Dios pasa por Hollywood." @maryclairerose https://www.linkedin.com/in/maryclairekendall/